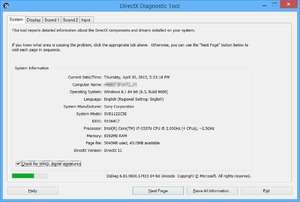 “DirectX runtime for Vista and higher”

A review of DirectX 11 by Tina de Pierre

Note: This file contains a collection of DirectX libraries including 9.0c, 10 and DirectX 11. It will update the version of of DirectX that your system is running. You should first use this application to extract the files to a directory on your computer from which you will run the file DXSETUP.exe.

DirectX 11 for Windows is an update to Microsoft's graphics acceleration for Windows and providers updates to Pixel Shaders, Direct3D, DirectSound, DirectX Media and DirectSetup. This update also provides for a smoothing gaming experience for a number of titles and is required by many modern 3D games. It also introduces support for tessellation, improving multi-threading support and can take advantage of multi-core processors and better computing of shaders.

This version of DirectX 11 is not officially supported on older operation systems before Windows Vista, so Windows XP users aren't so lucky.

If you're using Windows XP, check out DirectX 9.0C. This version is for Windows Vista only.

This download is licensed as freeware for the Windows (32-bit and 64-bit) operating system on a laptop or desktop PC from components without restrictions. DirectX 11 Update 11 is available to all software users as a free download for Windows 10 PCs but also without a hitch on Windows 7 and Windows 8.

Compatibility with this software may vary, but will generally run fine under Microsoft Windows 10, Windows 8, Windows 8.1, Windows 7, Windows Vista and Windows XP on either a 32-bit or 64-bit setup. A separate x64 version may be available from Microsoft.

Ranking in
Components Software
#1 of 29